St Martin’s Church in Bladon near Woodstock, Oxfordshire, is the Church of England parish church of Bladon-with-Woodstock.  It is also the mother church of St Mary Magdalene at Woodstock, which was originally a chapel of ease (for the attendance of those who cannot reach the parish church conveniently).  It is best known for the graves of the Spencer-Churchill family, including Sir Winston Churchill, in its churchyard.

There is no record of the church building itself until 1802, when the parish petitioned the Bishop of Oxford to grant them a new building as the old one was becoming dilapidated and dangerous.  Permission was granted, the medieval church was demolished, and the 4th Duke of Marlborough paid for building materials and the new church was opened in 1804.

The parish of St Martin’s includes Blenheim Palace, the family seat of the dukes of Marlborough.  Most ‘lesser members’ of the Spencer-Churchill family are interred in St. Martin’s parish churchyard at Bladon.  With the exception of the 10th Duke and his first wife, the Dukes and Duchesses of Marlborough are buried in the Blenheim Palace chapel.

Sir Winston Churchill had expressed a wish to be buried at Bladon.  So, on 30 January 1965, after his state funeral service at St Paul’s Cathedral, London, his body was taken by train to nearby Hanborough railway station and thence to Bladon.  There, the private burial took place, conducted by the rector.  By contrast with the earlier service, only relatives and close friends were present.

In 1998 his tombstone had to be replaced because of the large number of visitors over the years having eroded it and its surrounding area.  A new stone was dedicated in a ceremony attended by members of the Spencer-Churchill family.  However, after only eight years the gravestone had become dirty and partially eroded again.  In July 2006 the area of the graveyard containing Churchill’s grave was closed to the public and a cleaning and restoration project restored the gravestone. 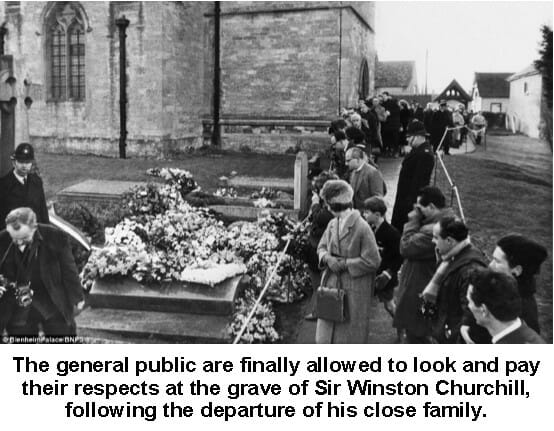 Campaigners intend to install a stained-glass window at the church where Sir Winston Churchill is buried, to mark 50 years since his death.  St Martin’s Church, in Bladon, has raised £10,000 of £30,000 to help mark a year of milestones for the wartime Prime Minister.  It marks his January 24 death, 75 years since he became PM on May 10, 1940 and the Battle of Britain from June to September that year.

Bladon Parish Council chairman Robert Courts has helped set up the project and is a member of the global Churchill Centre to remember the ex-PM.  He said:  “We wanted to do something to mark what will be the major anniversary of the greatest Briton.  Churchill is part of the church’s identity.  It’s famous for being the last resting place of Churchill and we are very clear that we are custodians of the grave site and the care of his memory.  We get hundreds, possibly thousands, of visitors each year from all over the world.”

The window will include badges of the regiments with which Churchill served, some of his quotes and best loved motifs and achievements.  It includes a vignette of him touring a wartime dockyard;  on the banks of Germany’s river Rhine in 1945;  and a black and white Union Flag.

Churchill asked to be buried at St Martin’s because his father and mother, Lord Randolph and Lady Randolph Churchill, were also buried there, and he wanted to be buried in a country churchyard close to his birthplace at Blenheim Palace.

Mr Courts added:  “It’s what he wanted it to be.  He wanted to be buried in a proper English church rather than in Westminster Abbey, but there’s nothing inside the church that’s a memorial to him.  So, we thought it’s 50 years, it’s about time we had something striking.”   He said:  “You don’t get an opportunity to contribute to a lasting memorial like this very often.”

The window will contain some of Churchill’s most famous quotes including: “Never give in, never, never, never, never – in nothing, great or small, large or petty”;  “You ask, what is our aim?  I can answer in one word: Victory”;  and  “I have nothing to offer but blood, toil, tears and sweat.”

After a state funeral at St Paul’s Cathedral, Sir Winston’s body was taken by train to Handborough station, then placed in a hearse for the short journey to the church – which has about 70 worshippers.

The Rector of Woodstock and Bladon, the Rev Adrian Daffern, said he was thrilled with the window, designed by London’s Emma Blount.  He said:  “This is a great opportunity for us to mark the 50th anniversary of the death of one of the most remarkable leaders the world has ever had.  It is a privilege for us to be the guardians of his final resting place.”

The window is divided into two ‘lights’.  The left hand “St Martin light” features the cap badge of the Queen’s Own 4th Hussars, of which Churchill was a colonel between 1941 and his death.
Vines and grapes form the background and St Martin the patron saint of soldiers is depicted.  At the foot of the light is a vignette of Churchill touring a wartime dockyard, cheered by workers.

The right hand ‘St Alban light’ features the badges of the Queen’s Own Oxfordshire Hussars, the 6th Battalion of the Royal Scots Fusiliers, with the cap badge for the Harrow Rifles at the top of each light, all regiments with which Churchill served.
The footing of this light shows Sir Winston, Field Marshall Montgomery and General Alan Brooke, Churchill’s military adviser, on the banks of the River Rhine in Germany at the end of the Second World War.

The border symbols include a Spitfire fighter plane, a book written by Churchill, Churchill playing polo, Churchill’s bow-tie, the portcullis of the House of Commons and Union Flag in black and white.
There is also an evacuee child with a label and a suitcase, red poppies, a tank, a gas mask, the St George’s flag in colour, the V for Victory salute, and Churchill’s cigar and paint brushes.  Running throughout the coloured background to both lights are quotations from Sir Winston’s speeches and writings.

The Bladon verger who met him in Germany and then was at his burial.

A 91-Year-old who served as a verger at the burial of Sir Winston Churchill has recounted the historic day 50 years on.
Frank Hall was verger at St Martin’s Church in Bladon, where Sir Winston asked to be buried, and lived in the church cottage with his wife Jean, now 85. 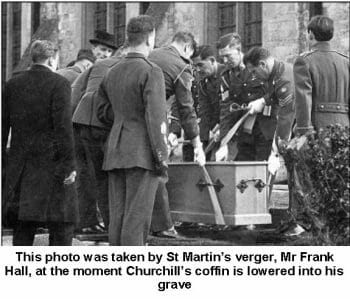 Mr Hall had met the former Prime Minister while serving in Germany in 1945 and it left a lasting impression on him.

The Stonesfield pensioner has unearthed his treasured scrap books packed with photographs of the occasion that have been gathering dust in his home for 50 years.
Mr Hall said:  “It was something special because it was Winston Churchill.  It was just an ordinary service and his family looked like ordinary people at a funeral, even though they weren’t ordinary.  Then afterwards when we opened the churchyard there must have been thousands of people.”

He continued:  “People kept coming until midnight.  When they left the churchyard, they got down to the main road and there were no lights.  They couldn’t find their cars and the fire brigade came down and put lights all around the graves.  It went on for weeks and weeks and it’s still going on today really.”

Mr Hall joined the second battalion of the Ox and Bucks Light Infantry in 1942, attached to the 6th Airborne Division.  He crossed the Channel six days after the D-Day landings on to Sword beach and was involved in the big push across the Ardennes and the Rhine.

He recalls the day in the middle of the campaign when Sir Winston arrived suddenly in a Jeep to inspect his unit.
He said:  “He came up with Monty [Sir Bernard Law Montgomery, commander of the British forces] and I said to my mate:  ‘If I was in his position I wouldn’t be up here, I’d be safe back at home’.”

He has donated the scrapbook to a new exhibition at Blenheim Palace, Sir Winston’s birthplace, which marks the 50th anniversary of his death.

A further article printed in the Oxford Mail on 28th January 2015 :-

The 50th anniversary of Sir Winston Churchill’s funeral will be marked across Oxfordshire tomorrow.  But most people who visit his grave in St Martin’s Church in Bladon probably do not realise the man who carved his gravestone is responsible for memorials to many more of the county’s great and good.

Stone-carver Bill Brown has been perfecting his craft since he was just 15-years-old when he started to practise on bits of cast-off stone. 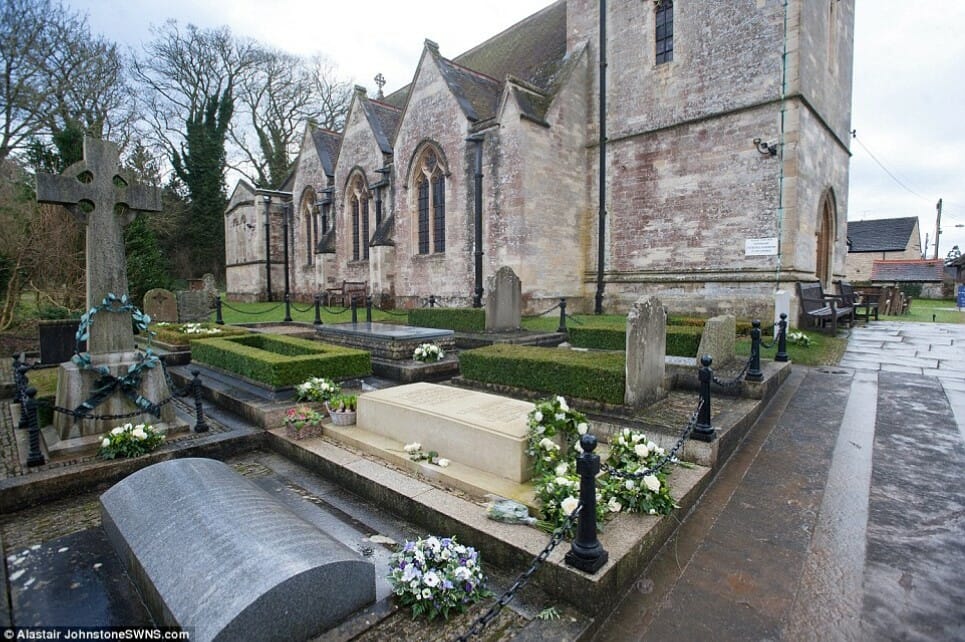 In the years since, the 81-year-old has carved the gravestones of Churchill and his wife Lady Clementine, JRR Tolkien, CS Lewis and the 10th Duke of Marlborough. He also carved a memorial for James Bond creator Ian Fleming, who spent five years of his childhood near Wallingford.

When the Queen Mother passed away in 2002, Mr Brown was asked to carve the memorial above her vault at Windsor Castle.

The father-of-two said:  “You get a real sense of satisfaction knowing the memorials and gravestones will be around forever, and that is really good.  At the time when I did CS Lewis and JRR Tolkien’s graves it was just work I had to do.  I did not know much about them at all.  It was only afterwards that I really realised the significance of it.”

Mr Brown started his career at stone carvers Axtell and Perry after being evacuated to Eynsham from London’s East End during the Second World War.  He had branched out on his own by the time his work caught the eye of the Churchill family after Lady Clementine’s death.

He was commissioned to carve an intricate gravestone with raised letters for both Sir Winston and his wife when she was buried with him, replacing the original one which had been on the wartime leader’s resting place.

He said:  “Sir Winston’s daughter Mary Soames came and saw me while I was doing it and gave it the go-ahead.  How long it takes to carve a gravestone varies.  It takes me about three days or so to carve one with sunken letters but it’s longer for ones like Churchill’s.”