A Blue Plaque is a permanent sign installed in a public place in the United Kingdom and elsewhere to commemorate a link between that location and a famous person, an event, or a former building on the site, serving as a historical marker.

“Fears of invasion by French Revolutionary forces and of an internal insurrection caused the government to ask for troops of volunteers to be formed in the shires.  In response to this a meeting of ‘Nobility, Gentry, Freeholders and Yeomanry’ was called at the Star Inn in Cornmarket in 1794.  This led to the formation in 1798 of the County Fencible Cavalry at Watlington, the forerunners of the Oxfordshire Yeomanry.”

The title ‘Queen’s Own Oxfordshire Hussars’ was conferred by Queen Adelaide after a visit to Oxford in 1835.  Several Dukes of Marlborough and their family have commanded the regiment;  Sir Winston Churchill was in charge of the Henley Squadron 1905–1913 and was Honorary Colonel at the time of his death in 1965.  The men of the QOOH have seen service in all the major conflicts of modern times.  In 1972 they became part of the Royal Corps of Signals (TA) based at Banbury, then with a further Army Re-org in July 2014 they became part of the Royal Logistic Corps, remaining at Banbury and known as Reservists, the ‘TA’ being dropped around this same time. 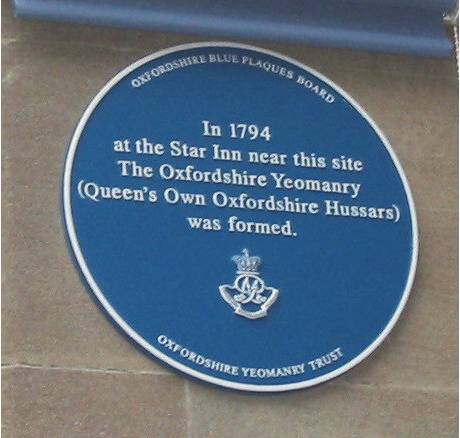 The Star Inn, (originally Marshall’s Inn established in 1397), is first recorded in 1469 and was a major coaching inn from the eighteenth century.

In 1863 it was incorporated into the Clarendon Hotel which was one of Oxford’s best hotels until its demolition in 1954 to make way for the Woolworth’s building.  This in turn was demolished when the Clarendon Centre was built.
The plaque is situated on the north wall at the entrance to Frewin Court.

The plaque was unveiled at the Clarendon Centre, Cornmarket Street, Oxford on Saturday, 8 November 2003 by His Grace, John Spencer-Churchill, the 11th Duke of Marlborough.

At the unveiling ceremony, the Duke gave a rousing speech :-

“My Lord Lieutenant, ladies and gentlemen,
We are here this morning to unveil a plaque which records the meetings, which took place at The Star Inn on the site of this building in 1794.  The people who attended the initial meetings were described, at the time, as being drawn from the “nobility, gentry, yeomanry and freeholders of the County.
They were being asked by the government, voluntarily to form troops of ‘Yeomanry Cavalry’ to help keep the peace locally.  It was important that they be mounted so as to have the advantage of mobility.  This was at a time when there was a real fear of the recent French Revolution being repeated here as well as the perceived threat of invasion by Napoleon who was rampant on the continent.  These problems were aggravated by the fact that we had no police force as we know it and that our small regular army was fighting `Boney` in Spain and elsewhere.
It has to be said that although the need for some organised voluntary body to assist the civil power seems very obvious to us now, it took the `gentlemen` of Oxfordshire FOUR years until the first troop of our County yeomanry was formed at Watlington in 1798.”

The Duke continues,  “However, having once got started, they did well.  Up until the middle of the nineteenth century they were involved in a number of disturbances in the County when their mounted presence, or the threat of it, had a calming effect even if it was not always as successful as it ought to have been.
Later on, not only did the Oxfordshire Yeomanry become a very smart thing to belong to, it also benefited from some senior officers who gave it standards which aimed to equal those of the regular cavalry.
They became very proud of the title Queen’s Own Oxfordshire Hussars conferred on them by Queen Adelaide.
It seems appropriate that a Marlborough should perform this unveiling as my family were associated with The Regiment from the start.
Among many others, Lord Francis Spencer raised the first Woodstock Troop in 1803.
The Regiment was commanded by the 5th Duke in 1857 and by my grandfather from 1909 to 1914.
Winston Churchill joined in 1902 and commanded the Henley Squadron from 1905 to 1913.  He rejoined after the first world war, served the Regiment as a gunner, and was Honorary Colonel at the time of his death in 1965.
Of course, MOST of the people who have served in the QOOH over two hundred and five years have not come from the landed gentry.  They have come from all sections of the Oxfordshire community. Volunteering in the first place as part-timers (Territorials) they have served and died for us in South Africa in 1900 and 1901, in the great war when the QOOH were in France from 1914 until the end in 1918, and in the 1939/45 conflict in the far–east including the Burma railway, as well as north-east Europe.
Members of the QOOH are serving with the regular army as I speak, in Bosnia, Iraq and other countries, all of them volunteers.
I think that the meetings in 1794, which led to all this, are well worth remembering and hope that you will share my pleasure when I unveil this plaque.”

At the unveiling a contingent of 5 (QOOH) Sqn, R Signals, (TA) were present, along with many members of the QOOH Association to witness the event.

Below I offer more pictures of the unveiling event

A little history of the Star Inn

For at least 400 yrs the Star Inn was an ancient coaching inn until 1863.  In that year the Star Inn was acquired by the Clarendon Hotel and in 1864 it was reported that it had received an upgraded frontage.
I939 – the building had been purchased by FW Woolworth & Co, but because of the war, demolition was delayed, and the building served as an American Servicemen’s Club during the second world war, and then until 1952 it was used as offices.
Woolworth’s eventually demolished it in 1954 to make way for their new store, five times larger than its predecessor and featuring a cafeteria.  In 1957 it retained its link to its history and was renamed Clarendon House.
The Oxford branch of Woolworth’s closed in 1983, and in 1983/4 the site became the Clarendon Centre.  This included one large retail unit, 22 small to medium units, and a pedestrian mall linking Cornmarket St to Shoe Lane and Queen Street.